Katie is available for: 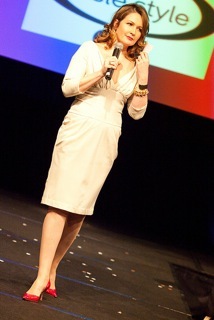 Ever since I was a little girl, I have loved fashion. That passion eventually led me down the path of hosting a local, lifestyle TV show that focuses on stories about entertainment, the arts and, yes, fashion. I have been the host of Inside City Limits, the longest running TV show in Northern California, since 2005. It is a freelance position with Comcast, the largest telecommunications company in the United States.

I love my work because I meet incredibly interesting and inspiring people and empower them to share their stories with our viewers. I hit the streets to discover the unique events, art, fashion and people that make San Francisco so special. My job is intellectual, creative, and high-energy.

I look forward to helping you pursue hosting a TV show. Start small but aim big. One step at a time!

I got the TV hosting bug as a student at the University of Wisconsin-Madison. While studying at the UW, I took a broadcast communications class where I learned to be a TV anchor and I fell completely in love with the whole process.

After college, instead of going to work at a local TV station, I took a left turn and entered the world of fashion via a corporate retail job. While fashion was a passion of mine, it didn't afford me the ability to be on-camera. Because I loved doing both, I worked hard to find an opportunity to do them in tandem. That opportunity came when I became the media fashion spokesperson for the major retailer I was working for at the time. My work as a guest on TV talk shows led to my smooth transition into a TV host role.

Early in my career, I had the pleasure of working with the greatest host of all time, the late Dick Clark. He taught me the most important thing: a TV show isn't about the host; it’s about the guest. Your job is to make the guest look good.

The other best advice I can offer is don't “wing-it”. Preparation is the key to hosting success. The hosts who seem so natural in front of a camera have done their homework.

What you stand to make in this business is really wide open. As a freelancer I have worked for everything from gratis in the past to garner experience to earning a very nice income to host today.

I started out as a kid in a small Midwestern town where the nearest shopping mall was 50 miles away, but with perseverance, I was able to make a career for myself in fashion and TV hosting. I was mentored early-on by a woman who taught me to decide what I wanted to be in life, talk the talk, walk the walk, and learn as much as you can about it and then act on it…and you will become it.